What Is The Cost of Living in Washington DC?

Washington DC is expensive. Living here is no joke when it comes to money. Prices in DC far exceed the national average, with Washington DC ranking 13th most expensive of the 118 U.S. cities ranked on Numbeo’s cost of living index. But DC is also very diverse in terms of neighborhoods and housing costs vary depending on the specific location in the DC Area. That is – there are affordable places to live in DC. It is hard to find a truly accurate cost of living calculator that will tell the whole story. If you’re moving to Washington DC and want to know how it compares to where you currently live, drill down to the cost of living for your town or county instead of looking at your entire state. Then compare those figures to DC.

So What is the Cost of Living in Washington DC?

The World Population Review offers information on all 50 states but unfortunately forgot DC – sort of. There is mention within the article that DC is second only to Hawaii as having the highest cost of living. DC is followed by California, Oregon and New York to round out the top 5 most expensive states on the index. States are rated on affordability based on a scale, with 100 serving as the U.S Average. Washington DC ranks at 161.1, and house prices rank at 279.2.

To drill down the Washington DC cost of living more accurately, Numbeo, which has more relevant information, was used. In this table DC is compared to New York, which is one of the most expensive cities in the U.S. and also serves as the benchmark, and Dallas, which falls among the least expensive. 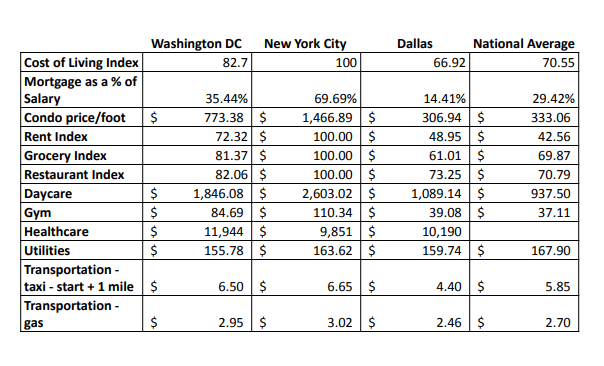 The Washington DC Cost of Living looks wildly out of line with the rest of the country. The states it shares the top 5 spots with on the World Population Review are known as some of the most expensive areas to live in the country. But it’s unfair to compare DC to an entire state. And when compared to DC, places like New York City and San Francisco rank much higher in terms of cost. The cost of living in DC has a lot of nuances that are important to understand. Let’s break down each item in terms of cost and what these numbers actually mean.

In DC, homeowners on average spend 35% of their income on their mortgage. Comparing this figure to a couple other major cities, in New York City, an average of 69% is spent on mortgage costs (debt to income aside.) For comparison purposes and a reality check, in Dallas, Texas, you’ll spend 14% of your salary toward your mortgage.

If you’re looking for more information on living in Washington DC, this video has a lot of great information.

Rent prices vary in the metro area depending on proximity to amenities, nightlife and transportation. Studio/efficiencies typically cost around $1500 – $1800. Average rent in Washington DC for a one bedroom apartment is $2450 according to Apartment List. Two bedrooms will cost $3462 and three bedrooms – which are usually houses as three bedroom condos are rare in DC – cost an average of $4282.

Apartments and homes for rent on the edges of the city and far from restaurants and other attractions will cost significantly less in rent. There are also neighborhoods which are not as developed where renters will find much lower prices. Rents are lower in Maryland and Virginia, which have areas close enough to be easily commutable by public transportation – called metrorail.

Healthcare costs will vary depending on state laws and how healthy the population living in the area are. At a state level, DC ranks the highest with an $11,944 cost per capita. While DC is generally considered a healthy area, health insurance costs are still the highest in the country. New York City’s cost per capita is $9851 and in Dallas it is $10,190.

Washington DC utilities are no better or worse than other cities. The average cost for similar size condos in DC, New York and Dallas all run pretty close to each other. Differences in climates, service providers and service type make utilities a hard metric to use for judgment on the overall cost of living in the metro area.

Pre-covid and supply chain issues, grocery stores in DC seemed to operate by the seat of their pants. Sometimes milk at the same grocery store would go up $1.50 to $2.00 over the course of a year. When my parents came from Connecticut, one of the most expensive places in the country, even they were shocked at how expensive produce and dairy was. I remember a block of mozzarella cheese which was $3.99 in Connecticut – or anywhere else in the country, would cost $6.99 in DC. So you have to be super careful in the stores, check prices and always use store coupons and discounts available.

Numbeo reports that if you spent $100 in a New York grocery store, that you could get the same groceries by spending $81.37 and in Dallas $61.01. The national average is $69.87 for those same New York City groceries.

Restaurants: Are They Expensive in DC?

Yes. They are. Just go to Baltimore. One thing that really adds up in DC is the tax in restaurants. The indexes report that a restaurant in DC may charge $82 and you could get that same food in Baltimore for $74. Baltimore restaurant tax is 6%. DC’s sales tax is 6% but restaurant taxes are a whopping 10%. Lunch with one friend will easily run $75. It gets old, really fast.

I’m also going to call a bit of a foul on the information. As DC is close to Baltimore, it is possible to go to a Baltimore restaurant. The comparisons made for the online indexes seem off, possibly comparing a higher end restaurant in Baltimore to an average one in Washington, DC. Prices for alcohol and food are significantly cheaper in Baltimore, to the point where we laugh when we receive a bill at a restaurant.

A gallon of gas is almost as pricey as New York. If DC’s gas prices are at $2.95 a gallon like in the good old days, then in New York you could expect them to be $3.02 and in Dallas $2.46. It pays to live on top of oil! If you wanted to take a taxi, initiating the ride plus driving one mile costs $6.50 in DC, $6.65 in New York City and $4.40 in Dallas. The national average is $5.85. This metric is tougher to use in trying to gauge affordability. Some cities have a more efficient taxi system than others.

Public school in DC is free for DC Residents, as are charter schools, and some families may be able to take advantage of free Pre-K at 3 years old. But if you decide that DC Public Schools don’t serve your needs, most private schools cost upward of $35,000 a year. Yes, even for Kindergarten.

Entertainment is a mixed bag. There are many free museums in DC. In fact, the free museums are one of the best things about living in DC! When shows come to the metro area, the prices are typically not much different than other cities for major shows/concerts. The differences are more evident in smaller venues though when compared to DC bars and clubs. This is where you will find the city premium on pricing.

A monthly gym membership costs an average of $85 in DC, where that same membership will run $110 in New York City and $39 in Dallas. The national average is $37.

The Salary Needed to Live in DC

The 2021 median income in DC for a single person household is $90,300 and for a family of 4 it is $129,000. This salary would allow a comfortable lifestyle for a single person or couple renting a one bedroom apartment close to downtown. They would have around $2500 left each month to spend on non-housing costs. A family of 4, however, will find that the median income is not enough for a larger home in DC. Many will need to have a family income at or above $200,000 to live in DC or they will need to move to the suburbs to find adequate space on the median income.

The average cost of living in DC is higher than most other cities in the United States aside from Boston, New York, San Francisco. But the amenities, history and culture DC offers makes it one of the best places to live. DC Residents endure the high prices, realizing there is a payoff in living in the city where the decisions about our country are made.

FAQs on the Cost of Living Washington DC

Why Are Homes in DC Expensive?

People are well paid to live in the nation’s capital. The Federal Government is a huge employer in the region, as well as lobbyists and government contractors located throughout the metro area. This has held the home prices up through periods of economic contraction. Many people refer to DC as “recession-proof.”

What is Minimum Wage in DC?

Is DC Cheaper Than NYC?